Before talking about who we are and what we offer, let us begin by telling you where we come from and where it all began.

Charmour Technologies returns to the centuries-old trick, methods and procedures of the leather crafting trade, thanks to which fine bags and meticulously designed, handmade suitcases have been passed on from generation to generation in many families, since the 19th century.

The founder of the Charmour Technologies brand, Róbert Csángó, has the leather crafting trade, or as they called it back in the day, ‘suitcase making,’ in his blood.

The leather crafting family tradition arches over more than a century:

The Csángó brand founded by the grandfather in 1897 became world-famous as soon as at the beginning of the last century, when in 1910, he was the first Hungarian to receive the grand prize of the Paris World’s Fair for his patent.

The secret to the dynasty-founder Henrik Csángó’s success lay in further developing and refining known procedures.

He was the first to recognize the new market opportunity in producing hand suitcases for travels that became increasingly fashionable.

His success reassured Henrik of his faith in serious business opportunities that were to open up to him in Budapest.

During the first half of the century, several Csángó shops were opened in Pest thanks to the relatives that also carried on the leather crafting family tradition, paying special attention to quality.

The horrors of the 20th century, however, tore the members of the family apart, and nationalization practically killed the domestic leather crafting trade with its famous demand for fine quality.

Some members of the family emigrated to England, some settled in Argentina and continued the tradition with success. Decades later, there were even some photos found taken in Bombay: proof that a Csángó shop was opened even as far as two continents away.

In fact, the descendants are renowned in the leather crafting trade and the world of fashion to date.

The heirs in Hungary had decided to follow the footsteps of their grandfather and revive the reputable name and the world-famous enterprise associated with it. 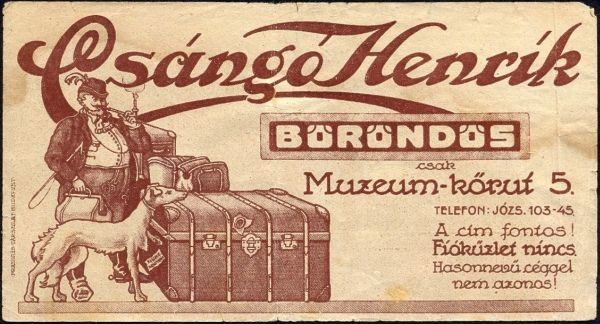